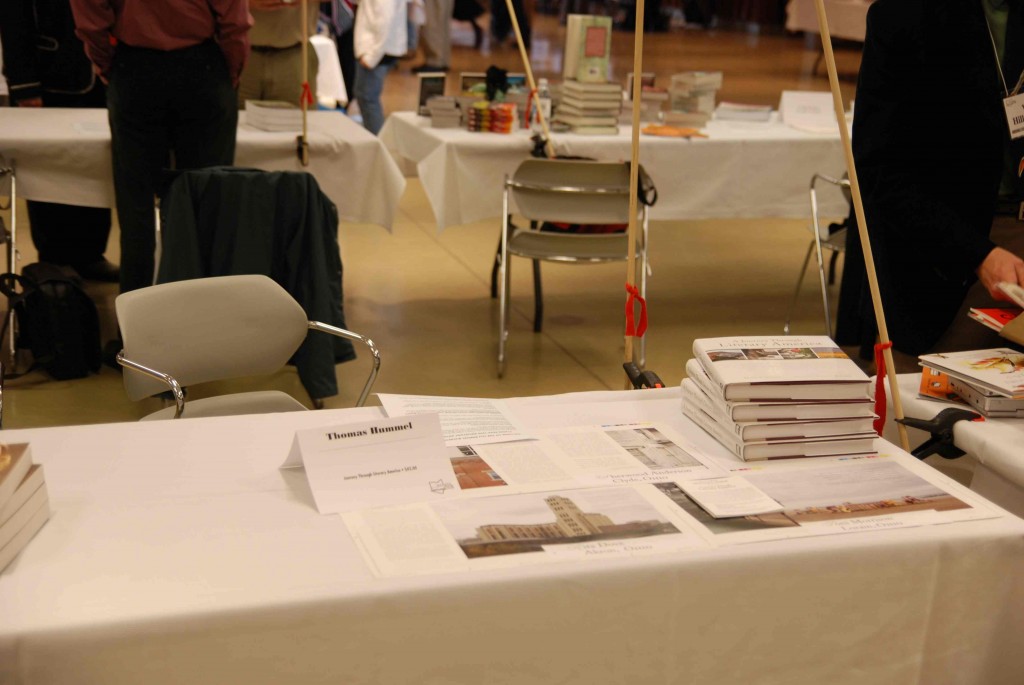 Akron-Canton Airport: I knew I was not in California when I opened the driver’s side door of my rented Hyundai Accent and saw, laid across the passenger’s seat like a sword, a brand new ice scraper, with broom on one end. For use if needed. Thankfully, I never had to use it.

On the way from the airport to my distant hotel, I listened to the radio’s pre-set station, a talk radio station. Clearly local. The talk radio hosts batted around notions of what would happen when their contract with Clear Channel Communications came up for renegotiation. The host was pretty sure they’d be asked to move to a bigger market than Akron/Canton to extend, so to speak, their listening empire. His female sidekick, who followed the role of modern talk radio female sidekicks and enable—which consists mostly of never saying no—wasn’t so sure about that. But she sounded willing to believe. The commercials came. And after that they played “name that bitch,” which consisted of playing a sound clip from some recent woman in the news, and then guessing who it was. This day’s clip was Anna Kournikova. Is this what passeth for talk radio in the smaller markets? I wondered.

The next day, on my way to the distant Buckeye Book Fair from my centrally isolated hotel, I looked for another channel, as the talk radio had given away to heavy metal in the morning hours. The dial landed on a gardening show. And then another. Most of the callers, wondering what they should winterize, or what it meant if all the leaves on a particular plant turned yellow, were men. 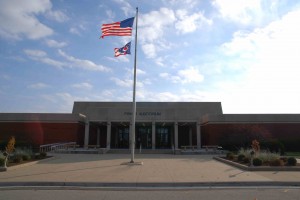 The Buckeye Book Fair was held from 9:30 am to 4 pm in the Fisher Auditorium, a low, wide building on the OSU/OARDC (Ohio State University/Ohio Agricultural Research and Development Center) campus. We were invited to take part because A Journey Through Literary America features three Ohioans: Sherwood Anderson, Toni Morrison, and Rita Dove. There weren’t very many other out-of-state authors. None from California. This year, in a bow to the economy, admission was free. The year before, 7000 people had attended the fair. The free admission seemed to help. By 9:30, people were lined up at the entrance to get in. 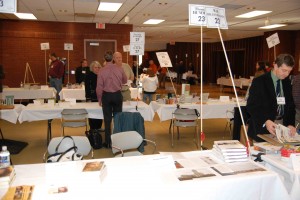 We each had our names and table numbers at the tops of 3/4” dowels, attached to our tables by clamps. Around each dowel was tied a piece of red cloth. And when we ran low on books, we were to raise the red cloth so that runners could see and replenish our stock. On my left (from where I was seated in the booth) was a children’s book illustrator, Will Hillenbrand, who had to run up the red cloth many times. He was surrounded most of the day by a crowd. A kind-looking man, who seemed through his pastime to have discovered the gift of eternal youth, he took time to explain his drawings and the way they worked with the stories. His latest effort is a children’s book named “Louie!” based on the youth of Ludwig Bemelmans, the famous illustrator of the Madeline books. It was really quite well done. His appeal did not preclude him from being a canny salesman. He sold out of all four of his books by 1:45, spent a few minutes talking about plans for next year with the Book Fair’s impressed organizer, and then skedaddled.

To the right of me sat a former English professor named Lisa Klein who has authored three novels: Girls of Gettysburg, Lady Macbeth’s Daughter, and Ophelia that are sold and packaged as Young Adult (YA) but can easily stand up to sterner standards. The jackets all feature attractive young women. But these are not chick lit for the YA crowd. I don’t think you would find musing such as this, from Lady Macbeth, in YA novels:

My lord rules Scotland with a strong arm, and what grew weak under Duncan’s lax reign has been shored up: the armies enlarged and newly outfitted, the fleets repaired, castles restored. The people must be brought to heel and made to work for the good of the country. But instead they grumble out of ignorance and laziness, and foolishly fear that one unseasonable years means starvation and ruin forever. Shall we let England overrun us or the Norsemen sweep down from the sea? Not while Macbeth is king and I am queen!

Klein’s themes are not sugar coated. Her writing has power. The dialogue is meaningful, and has a Shakespearean cadence.

A Journey Through Literary America sold well at the Book Fair. Several buyers came by early in their Fair visit, perhaps fought some internal battle, then returned and paid the $42.00 the book was going for at the show. It was one of the most expensive books at the show. But to those who fell in love with it, it was a small price to pay.

At the Buckeye Book Fair, my eyes were opened to the existence of Malabar Farm and the personage of Louis Bromfield when I was in Ohio. I had never heard of the Pulitzer prize winner, nor his progressive farm although, in the manner of many revelations, once I heard of Bromfield I began to see him in other places. He was mentioned in the latest issue of Harper’s (content unavailable without a subscription) by Wendell Berry. Who wrote: “At the time when farming, as a vocation and an art, was going out of favor, Bromfield genuinely and unabashedly loved it.” (Berry would be gratified by those men, and women, who tune into the gardening shows)

Louis Bromfield’s first novel was The Green Bay Tree. After its publication he moved to Europe and became part of the Lost Generation. He won the Pulitzer Prize in 1926 for Early Autumn. Bromfield returned to Ohio at the age of 40. “I was sick of the troubles, the follies, and the squabbles of the Europe which I had known and loved so long,” he said. “I wanted peace and I wanted roots for the rest of my life.” He set down those roots,  that at Malabar Farm, which is now a park. A Journey Through Literary Ohio would have to put Bromfield and Malabar Farm right near the top of its list.

At times the Buckeye Book Fair felt like an AKC dog show. The ceilings were low. The sound reverberating off the walls was intense. By the end of the show, though I had barely moved around much at all, I was exhausted. But at the same time I was gratified at the response to the book and grateful to the show’s organizers for the invitation.

I rode back the way I had come, through shorn fields, and some that were still green. I saw the largest flock of blackbirds I have ever seen taking off from one of those shorn fields in a cloud that seemed to stretch on for half a mile.

Back at the hotel, in the empty parking lot of the neighboring The Pointe office complex, was a small flock of geese stopping over on their way south. Perhaps they are the procrastinators. It seemed like most of the geese were on their way south two weeks ago when we drove through the country. 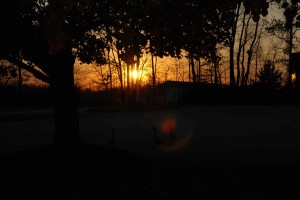