East of Denver, more of the same. Interstate lanes, buttes and rises and hillocks smoothed by mighty earthmoving equipment to create the Eisenhower Interstate System, alongside which not a living soul is to be seen…Our TARP dollars at work in mile after mile of road repairs: white line painting, paving, inexplicable spraying of liquid on the shoulders, miles upon miles of orange striped road work barrels taller than my son with signs warning of increased fines in road work areas (trying to give some of that TARP money back?)

Back in Denver at the Tattered Cover the booksellers gathered ’round the book, admiring it. The Tattered Cover, another died and gone to bookstore heaven experience, a different heavenk, this one in a former opera house or theather…immense…with comfortable chairs, the barnes and noble experience of pleasanty seating but un-canned, the furrniture not something you would find at the Holiday Inn Express…W.P. Kinsella, Annie Leibovitz looking dramatic, Al Gore looking not, Nick Bantock, Opalonga Pugh, Bobbie Ann Mason looking like a Bobbie Ann (with all due respect), Amy Tan, Kazuo Ishiguro looking like his prose, George Plimpton looking like a living icon (may he rest in peace), Susan Minot with flashes of early beauty, Walter Mosley looking friendly, Larry McMurtry looking like we saw him at the Academy awards for Brokeback Mountain, Martin Amis looking British and very much like a writer–these are the black and white photographs of authors who have read at the Tattered Cover. These framed photographs line the two staircases leading to the lower floor, and these are just a few of the names cuylled from one flight of stairs. The Tattered Cover is an inspiration, a landmark for book lovers in a Denver landmark building with statuary across the street against the watery blue Denver sky that makes it look all the more a wonderment.

As Colorado segues into Nebraska the terrain changes. A few men in pickup trucks are seen on country roads, a golden retriever in the back of one, fur flowing in the strong breeze. Finally, some people. And then more of the same: ribbons of highway cut through the midst of everything, though with some wather here and there at the side of the road. Then Gothenburg, a town of 3,000, with the second floor of an old Pony Express stop in the midst of the town square with a cheerful guide who relates how the stop was moved from a nearby farm to here and how it snowed six inches the week before. the Pony Express only existed for less than two years, running all the way from St. Joseph, Missouri to Sacramento, California and the investors took a bath on it before they were replaced by the telegraph. But what an impact they have made on the collective memory.

A few miles later, a covered arch over Interstate 80 in Kearney. This would be familiar to those who read The Echo Maker by Richard Powers which takes place in Kearney. Bonnie, the erstwhile girlfriend works there in authentic period dress. We didn’t stop in Kearney but Powers’s book has made it a fit subject for literary america. 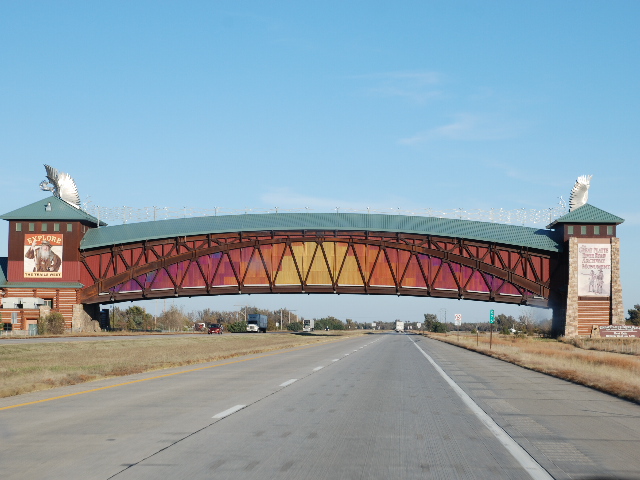 The interstates this time of year belong to the tractor trailers. Long haul carriers, short haul carriers, passing each other in the manner of racers in a very long race. On the sides one sees the railroad tracks every now and then, and the immensely long coal trains that probably come from the Powder River in Wyoming (John McPhee wrote about them in a New Yorker two part article a few years back which is now only available with a subscription). That night at the Holiday Inn Express we check out the movie CARS, by Pixar, which turns out to be a celebration of the beauty of the old Route 66 and the way things wuz before the Interstate came in and sterilized the driving experience–a message that was lost on felix who was, however, transfixed by the cars. A good road movie for the child.

Hastings, NE…city of 25000, where Kool Ade was invented. At the local museum: “Mount It! The Art of Taxidermy”, a convenience store named Smokes ‘N Jokes, a hair cutting place with a sign up that says “sometimes this business gets a little hairy.” Suggestion to comedians who cannot make it in the big leagues: move to Hastings. Hastings is just 43 miles, pretty much as the crow flies, from Red Cloud, the former home of Willa Cather.

Red Cloud: it’s Sunday. The town is closed up. Dead leaves skittering through the intersection in the middle of town. No stoplight. street paved with bricks. Only place open are the Sinclair gas station, with its logo of a brontosaurus (a comment on fossil fuels?) a convenience store/gas station names “The Bootleggers” where I ask for directions, and Cutters Cafe, where I drop off a book with the proprietor. By prearrangement she is going to give the book to the woman who runs the Cather Foundation bookstore tomorrow. When I walk in to Cutters, she asks, “So you’ve brought our book?” How on earth did she know who I was?

Like a ghoulish tourist, I ask for directions to the cemetery. I need to set something right. In My Antonia, Antonia’s father commits suicide and, because that is a sin, is buried at the crossing of two roads, rather than in the cemetary. This was a story based on the real-life person named Annie Sadilek, whose father killed himself. In the book, I wrote that his grave was still out there in the prairie. It is not. he has been moved to the Catholic section of the cemetery where he now rests with his wife and his son, Anton.