Herd to believe,but in 15 days the booksigning at Santa Barbara’s Chaucer’s Books will be behind us and we (my wife, my son, and I) will be taking to the open road on our way to the East Coast.

Our first stop will be Las Vegas. Why? Because it’s there. Though it certainly does have a certain literary and cinematic allusiveness, to boot. I hope that, unlike Hunter S. Thompson, I won’t see giant bats flying at the windshield as we get close.

The second stop will be Salt Lake City–city that Wallace Stegner came to consider home,  and home to one of my major clients as a printer: Gibbs Smith, Publisher. We will definitely stop in at Gibbs Smith, Publisher, where I want to introduce my son to Marty Lee- Vice President of Production and a fine human being. 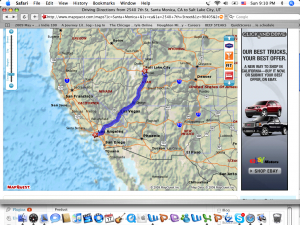 Gibbs Smith, Publisher grew from very small publisher to one of the powerhouses of the Western United States. Below, some of their history (lifted from their website)

Gibbs M. Smith always wanted to be a history professor. But while in pursuit of his master’s degree, Smith wrote a dissertation on Joe Hill–American labor martyr, proletarian folk hero, and songwriter–that profoundly changed his life. After the book was published by the University of Utah press and made into a movie, Gibbs started entertaining the idea of starting his own publishing company. While riding a cable car in San Francisco and contemplating this venture, he wrote Alfred Knopf a letter. “In my view, he was the greatest publisher in America,” reflects Smith. Knopf wrote back with words of encouragement; later they spoke over the phone. Gibbs now had the inspiration needed to embark upon this extraordinary entrepreneurial adventure. In 1969, Gibbs and his wife, Catherine, started the company known today as Gibbs Smith, Publisher. With $12,000 in cash earned from the Smiths’ work on the movie Joe Hill, the company published four initial books, which would be used as supplementary texts in college history classes. The first few years were tough, as Gibbs and his wife, Cathy, ran the company out of their studio apartment in Santa Barbara.

In 1973, the company relocated to Utah, where Gibbs and Cathy reinvested profits back into the business and lived on savings. They spent the first summer there converting an old barn (built in 1916) on the family farm into offices. It was a race against time, as the barn had no roof and winter was rapidly approaching. During that summer they also managed to publish a new textbook, Utah’s Heritage. This proved to be a very wise decision, as the company’s textbook division provided financial stability during the early years.

Working in a semi-converted barn was challenging at times. Madge Baird, who joined the company in 1974 and now serves as Managing Editor, recalls a meeting with an author that was interrupted by the birth of a lamb. “When I heard the news I jumped up, ran outside, and started ‘lambing,’” she said.

Gibbs will never forget sharing the barn with cows those first few years. “You could hear them mooing through the walls,” he says with a smile. “People could hear them over the phone, too.” When he would explain the ruckus, the response on the other end of the line was always the same: “You do what . . .from where?”

Today, many of the employees of Gibbs Smith, Publisher continue to work in the small but rustic and charming barn, and thankfully, the cows are long gone.

I’ll tell you more in the days that follow.